In response to this post suggesting a graphic explanation of how people actually think about politics based on George Lakoff's work, I created the following:

We are wired as humans to use our direct experiences to understand more complex things in the world and complex ideas about the world. The mechanism of that leap from experiences to concepts is made possible by metaphors.

Every complex idea about the world, including religion, science and mathematics, is based on metaphoric conceptions of the world. In politics, which is certainly complex, we all understand the metaphor of the nation as a family, which implies that the proper role of the government is to act as a parental figure for it's citizens.

The question of where you stand on a particular political issue is likely to be determined by whether you think that the government should act like a strict parent or a nurturant parent in how it acts on that issue.

What some people, the political purists amongst us, do is to reject one set of metaphors as bad policy. Because there are only two parenting philosophies that have any broad respect this gives the illusion of a linear spectrum of views stretching from one pole of strict parenting metaphors (politically conservative thought)to another pole of nurturant parent metaphors (politically progressive thought). At the end I will show why the bi-polar concept of politics is an illusion.

If you are already speaking to purists who agree with you then you will, at best, simply reinforce their already existing sense of what counts as a good idea.

On the other hand, if you are speaking to purists who disagree with you, then you are probably wasting your time.

The people that make the difference in elections and who are the most valuable to convince are called bi-conceptuals by George Lakoff. These are people who understand the arguments of both sides but do not have a pre-disposition to reject one or the other based on the implied philosophy of the metaphors they use. What research discovered about how people actually choose presidential candidates is that identification with the candidate is more important than agreeing with them. From Thinking Points Chapter 1

"Richard Wirthlin, chief strategist for former president Ronald
Reagan, made a discovery in 1980 that profoundly changed
American politics. As a pollster, he was taught that people vote
for candidates on the basis of the candidates’ positions on issues.
But his initial polls for Reagan revealed something fascinating:
Voters who didn’t agree with Reagan on the issues still wanted to
vote for him. Mystified, Wirthlin studied the matter further. He
discovered just what made people want to vote for Reagan.

"Reagan talked about values rather than issues. Communicating
values mattered more than specific policy positions. Reagan
connected with people; he communicated well. Reagan also appeared
authentic—he seemed to believe what he said. And because
he talked about his values, connected with people, and
appeared authentic, they felt they could trust him.

"For these four reasons—values, connection, authenticity, and
trust—voters identified with Reagan; they felt he was one of
them. It was not because all of his values matched theirs exactly.
It was not because he was from their socioeconomic class or
subculture. It was because they believed in the integrity of his
connection with them as well as the connection between his
worldview and his actions."

The bi-polar linear political spectrum that is commonly understood through the terms Left, Right and Center assume that people are either conservative, liberal, or standing neatly on a line in between those two extremes. The truth is that while there are effectively only two political philosophies they can be mixed and matched at random in an individual mind, depending on how that person thinks about each issue or situation at different times and under different influences. This inherent complexity of individual political thought makes the linear scale between only two extremes untenable.

Mapping the political landscape is probably more like mapping the population of an area that contains two large cities. While population is concentrated around each of the city centers and along the direct connections between them, there are also a variety of small towns and rural burgs throughout the area. The same is true of the political landscape. There are people who concentrate themselves around the purists and along the direct routes between them, but there are also people scattered widely around the entire area. The political parties are concentrations of population and the organizations who focus on specific issues are arrayed around them like small towns. Some people are well settled into their neighborhood and others move around regularly.

I hope this is a helpful and reasonably accurate portrayal. I am not an artist, so I am hoping that someone with some more artistic talent could create a better visual presentation. I have the graphics in a single page .pdf file if someone is interested.

Below is a one-page sized version of the graphics (click on it to see it full sized): 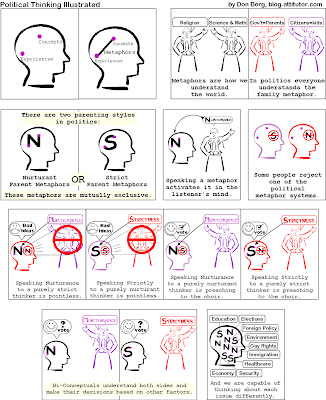